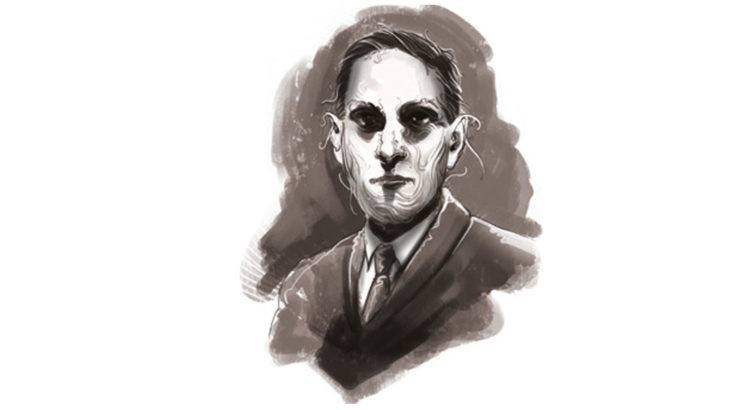 Howard Phillips Lovecraft’s (1890-1937) literary status has evolved from that of amateur journalist and pulp writer to that of canonical writer, as illustrated by the recent publication of his work in the prestigious Library of America collection. His fiction includes an onirico-poetic vein inspired by Lord Dunsany and culminating in the Kadath cycle, macabre tales inspired by Poe and located in New England, and more expanded narratives (“The Call of Cthulhu”, “The Dunwich Horror”, “At the Mountains of Madness”, “The Shadow over Innsmouth”, “The Shadow out of Time”, etc.) which develop an original mythology (also called “Cthulhu Mythos”) but also a cosmogony. The place of Man in the universe is redefined and relativized within the framework of a “cosmic regionalism”.

Lovecraft’s work oscillates between mainstream literature and popular culture, but also borrows from various genres (fantasy, horror, SF), which also explains its current popularity. The writer has become one of the icons of our contemporary culture. For the past several decades now, his work has given rise to numerous serious or parodic literary rewritings, but it has also inspired Heavy Metal music groups, among others.

Recent publications have revealed the impact of the Lovecraftian imagination on scientific discourse and philosophy (e.g. Graham Harman‘s books). The new translations in France (David Camus, François Bon, etc.) have made it possible to rediscover Lovrecraft’s work and to better bring out its wealth and complexity.

According to Michel Houellebecq, a great admirer of Lovecraft, about whom he wrote an essay: “It is rather curious that none of the many disciples of Lovecraft has been struck by this simple fact: the evolution of the modern world has made the Lovecraftian phobias even more present, even more alive”. There would thus be a topicality of the work, even a paradoxical modernity in a writer who has never ceased to proclaim his “horror of modernity” (China Miéville).

Images play a dynamic role in this rediscovery of Lovecraft, from cinema to video games, offering fresh perspectives to current generations in a context of resurgence of Gothic, horror and fantasy. Although the author’s life is now well known thanks, in particular, to S.T. Joshi, one of Lovecraft’s great specialists (whose monumental biography has recently been translated into French by ActuSF), although Lovecraft’s fiction has already been the subject of numerous critical works, only one documentary (Alain Trividic, Patrick Mario Bernard, 1998) has been devoted to him in France. Yet, the approach of that film is biographical and even though it addresses certain major themes, it never takes into account the intermedial dimension of the work and the iconic status of the writer who has also become a fictional character.

Therefore, this documentary film project aims at filling a gap and at offering a new approach of Lovecraft’s fictional universe and its multifaceted influence on various aspects of contemporary culture and art. The film will consist mostly of interviews of various specialists of Lovecraft as well as writers, artists and filmmakers. Yet, it will also have a fictional arc and approach with the presence of the narrator-investigator and the imaginary library, enabling to recreate Lovecraftian moods visually and aurally.